Depression that is not adequately controlled through antidepressant drug therapy is treated safely and very effectively at the TheraMind Center of Santa Barbara using transcranial magnetic stimulation (TMS).

Depression is a serious, often debilitating, medical condition affecting more than 17.3 million American adults every year. [1] It can affect every facet of a person’s daily life, from how they sleep and eat to their interactions with other people and may last for months and even years. Research suggests that depression is currently the second leading cause of disability worldwide. [2]  In 2000, the economic burden of depression was estimated at $83.1 billion in the U.S. alone. [3] Each year in the US, over 30,000 people die by suicide, 60% of whom suffer from depression. [4]  Overall, women are almost twice as likely as men to suffer from depression; however, depression in men may be under-reported. [5] Depression can affect anyone; it has no racial, ethnic or socioeconomic boundaries. About two-thirds of those who experience an episode of depression will have at least one additional episode in their lives.

Historically most depressive symptoms have been treated with antidepressant drug therapy. However, more than 4 million (estimated) adults in the U.S. do not receive adequate benefit from antidepressants and/or cannot tolerate the side effects caused by them. Serious side effects including weight gain, insomnia, fatigue, sexual dysfunction, nausea and indigestion often occur causing patients to cease using these medications. For these patients, an alternative treatment modality such as Transcranial Magnetic Stimulation (TMS) can be life saving.

Brain activity is reduced in depression

Since 2015 the TheraMind Center of Santa Barbara has been successfully treating patients suffering from Major Depressive Disorder (MDD) using non-invasive technologies such as transcranial magnetic stimulation (TMS). Patients interested in undergoing therapy at the Center are asked to provide a detailed medical history including all prior depressive episodes and current and former antidepressant regimens. Following collection of these records and certain diagnostic testing our staff schedules a consultation with one of our physicians who will first diagnose or confirm the diagnosis of MDD and determine whether the patient is an appropriate candidate for TMS or one of our other treatment modalities.

If the patient is considered qualified for TMS therapy the patient is given the option to have an advanced MRI (fMRI). The fMRI can then be used to (a) eliminate other potential causes of the symptoms, (b) further confirm the MDD diagnosis and (c) provide a road map for treatment locale(s). TMS treatment protocols are custom designed for each patient. In general, however, the therapy consists of an initial brain mapping to determine intensity and placement followed by 20 to 35 individual sessions. 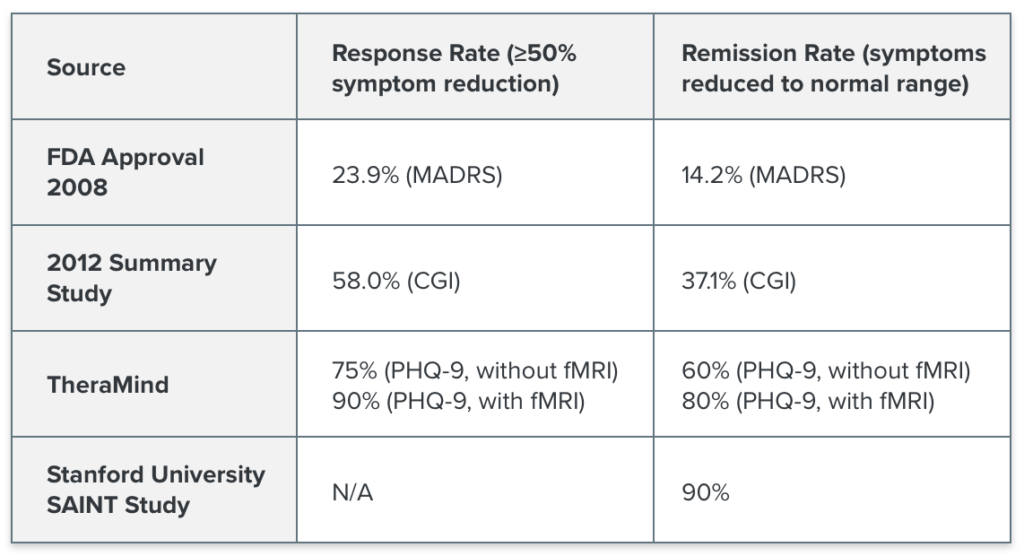